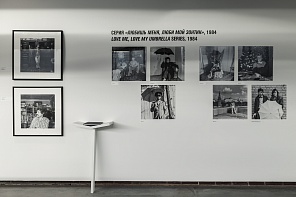 One of the key contributors to the Moscow underground art scene of the 1970s and 1980s, George Kiesewalter is known as a member of Collective Actions group and the Avantgardists' Club, and for exhibiting his works at the legendary APTART gallery. What is less-known is that he also was a prolific photographer of the scene in which he participated. Insider is the first exhibition to feature the artist's documentary archive photographs, which are now part of Garage Archive Collection.

Offering rare glimpses into an otherwise closed community, Kiesewalter's photographs capture the energy of the Moscow underground in the 1970s and 1980s. His archive includes documentation of Collective Actions' happenings, apartment exhibitions, portraits of fellow nonconformist artists and interiors of their studios, as well as scenes from their everyday life. "In the mid-1970s I was simply taking pictures of the people and events I liked on my basic Smena-7 camera that I always carried in my bag," Kiesewalter recalls. "I would photograph everything that happened in my circle, emphatically dissolving into whoever or whatever I was shooting and the whirlpool of happenings, travel, and meetings. I was shooting my buddies, my equals, ‘from the inside'."