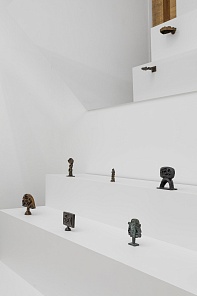 The project "Jacques Lipchits (1891-1973). A Retrospective" is a progressive immersion into the creation of the artist whose oeuvre is intrinsically connected with the crucial events of the 20th century that overturned the very course of the world history. Progressing through the display, the viewer witnesses the changes in the style of Lipchitz's works, as he/she "lives through" the epoch. The artist's manner evolves from naturalistic traditions to Cubism, and then to a less formalised style of his urban sculptures, which dwell on the complex mixture of mythological and religious motifs. The Cubist traditions are coherently expressed in Lipchitz's artworks. If he developed the basics of Cubist sculptural vocabulary at the beginning of his artistic career, later on the artist used these practices to create his unique plastic style, his music of space. Over 100 works displayed at the MMOMA, including sculptures, drawings in Indian ink, crayons and pencil, form a meditation on the existential expression of the 20th century sculpture, its place in the present-day culture and the milieu where the artist formed over the period of his career.

The architecture of the exhibition is completely white, made up of podiums and stands of different sizes, which host groups of sculptures. Huge mirrors placed over the stands allow the viewer to see the exhibits from every side.