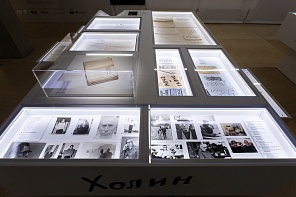 This summer, Garage Museum of Contemporary Art presents an exhibition of documents relating to the poetry of Igor Kholin (1920-1999) and Genrikh Sapgir (1928-1999), offering fresh insight into the work of two pioneers of Soviet nonconformist literature. Their names are often encountered together: in literary analysis, in publications on Russian contemporary art, and on children's book shelves.

Kholin and Sapgir met in 1952 and became close allies. Both were members of the first postwar unofficial community of artists and poets, known as the Lianozovo group, and pupils of its leader, artist Evgeny Kropivnitsky. They worked alongside some of the key names in Russian postwar art, including Oskar Rabin, Lydia Masterkova, and Vladimir Nemukhin. Bohemians of the 1960s and 1970s, their avant-garde poetry was unpublishable until the advent of perestroika. They were heroes of the literary underground, pioneers of samizdat, and featured in the first issue of the samizdat poetry journal Sintaksis, published by Alexander Ginsburg in 1959. Both combined an innovative style of writing with a strong commitment to truth, and a genuine interest in the life of ordinary people. They fused expressionism and realism, with an acute sense of the tragedy of the everyday and the poetics of the absurd. Their funny and moving "barracks poetry" quickly became part of Soviet folklore, often quoted by people who had never read the original texts. Kholin and Sapgir led a double life typical of nonconformist writers and artists of the post-Stalin era: showing their work only to a small audience of friends and admirers, they took odd jobs to make a living. Kholin worked as a waiter at the Metropol Restaurant, while Sapgir was an engineer at the Sculpture Studio of the USSR Arts Fund. Both became famous as authors of children's poetry, which was read by generations of Soviet kids. Sapgir also wrote scripts for a number of classic animated films.