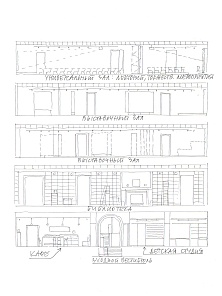 In the winter of 2017, the MMOMA Education Center was opened at the site of the Moscow Museum of Modern Art on Ermolaevsky Lane. This center represents a logical point in the development of the museum's involvement in education and popularization of contemporary art, which allows for the consolidation and expansion of the already existing educational projects of the Museum.

The project did not demand a large-scale rearrangement of the internal space. The museum building is an architectural monument of the 20th century. The main idea was to re-open the closed windows, to make the space of the lower floor visible, literally transparent, from the street, which corresponds to the aims of the Educational Center to be open to every visitor.

The MMOMA Kids zone and a museum cafe with a store found their place on the first floor of the center, and a library with a work area — on the second floor. The exhibition space on the 3rd and 4th floors were left virtually unchanged: the halls remained as free as possible while being adjustable for expositions. The fifth floor is intended for lectures, conferences and master classes; mobile partitions make it possible to rearrange the space easily depending on the objectives of the event.