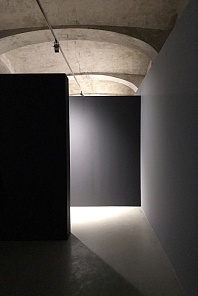 The exhibition features three videos and a series of photos. All works are united by the theme of a revolution in history and art. The artist regards the coup as a historical event and as an artistic method.

The central video of the exhibition "The Anthems of Muscovy" was created specially for the exhibition together with the composer Alexander Manotskov. In the film, the architectural styles of Moscow are compared with variations on the anthem of the USSR and Russia. Three epochs in architecture, three hymn variations.

Continues the theme of the coup video "Krisis" (al. Greek turning decision; the court). The classic discussion film, the judicial drama in which the participants, like the jury, try to assess the demolition of the monument to Lenin, but cannot come to a common opinion.

The video "In another time" takes place in the underground of the Moscow metro, where young people peer at the walls, listen to the sounds, look thoughtfully into nowhere. Dmitry Venkov catches a special course of time that flows in the subway.